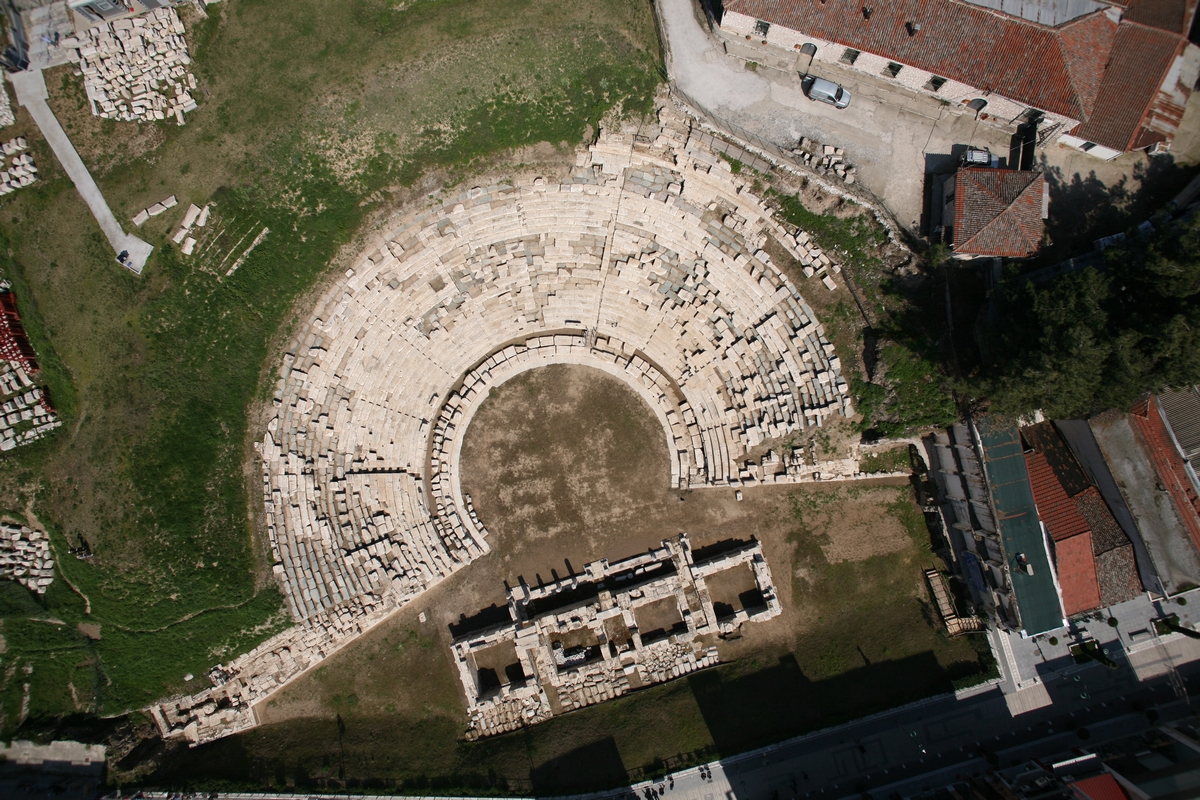 According to valid archaeological evidence the magnificent first Ancient Theatre of Larissa geared towards the south, near the ancient market town, is located in today’s city centre, as it expands in the current well-known Central and Tachydromiou Squares. In this market stood the temple of Kedros Apollon, which must have been built in the beginning of the 4th century BC.

The most important resolutions and judgements of Larissa’s municipality were taken at the place of the sacred shrine, while the citizens spent votive offerings in honor of God. The votive offerings established on the sanctuary include the column of Theotimos, a Thessalian rider who was defeated in the battle of Tanagra’s in 457 BC and a possible honorable declaration for Chrysogonos of Edessa, who had protected the Thessalian cities from the Aetolian’s invasions (the fact referred to by the ancient author Polyvios) in 217 BC. The latter was awarded with the title of “citizen of Larissa” and was given the right to acquire land and property in Larissa.

After the battle of Cynoscephalae in 197 BC the city’s rulers adopted roman-friendly politics and the new dominants in Greece started to offer them special privileges. At this time, an honorary resolution was erected at the sanctuary for the two servants of king Eumenes II of Pergamon, who had paid a visit in Larissa accompanied by his brother Attalus I (Titus Livius 42,58) in 171 BC. The honored attendants participated in the negotiations for the alliance between the citizens of Larissa with those of Pergamum and the Romans against the Macedonians. It is likely that the temple of Eleftherios Zeus existed on the northeast side of Tachydromiou square, probably built by the 2nd century BC.

As cited by inscriptions of the prevalent times, this temple constituted the place where all the official written texts of the so called “Koinon” (or “Unity”) of the Thessalians were kept in safety. In his honor and in remembrance of Thessaly’s liberation from the Macedonians, the celebration called “Eleftheria” was established. The feast was held every four years in Larissa, the capital of the “Thessalian Community” with the presence of correspondents from all cities of the region.

The first Ancient Theatre’s construction is unbreakably connected with the worshiping of God Dionysus and the performance of theatrical plays. It composed the centre of the civilians’ societal lifestyle as well. Such claim can be easily substantiated through the numerous findings, both inscriptions and sculptures, presented by the excavations. In the 1st century BC, the theatre was transformed into a roman arena exclusively aiming at the performance of notable celebrations, duels, animal fights, mimic representations of clowns, wizards and much more.

At the same period of time, the ancient citizens initiated the 2nd theatre’s erection, simply because the theatre was converted into an arena. This initiative derived from people’s desire to realize more collective events. Such an idea is verified according to inscription testimonies, since through them it is clearly mentioned that along with the celebration of “Eleftheria” and the horse races, poetry, dancing and music competitions also took place.

The First Ancient Theatre of Larissa with a 10.000 audience capacity was constructed during the first half of the 3rd century BC under the reign of Antigonus II Gonatas of Macedonia. It was not until the end of the 3rd century AD or the beginning of the 4th century AD that the theatre remained active. Therefore, it operated from almost six centuries. After a strong earthquake that struck Larissa in the 7th century AD, a big part of the epitheatre collapsed, as well as the second floor of the scene inside the orchestra. The “Fortress hill” actually constituted the “koilon” (or else hollow or cavity occasionally used as equivalent to theatron, referring to its seating area) of Larissa’s Ancient Theatre.

A natural hill cavity hosted the stepped cavea with seats. Almost in the middle, a 2 meter wide corridor was created, dividing the landing (diazoma) so as to provide the spectators with enough space to move conveniently around the place. The corridor is covered with big white smoothed marble slabs, which step on hulking flintstones and it also divided the cavea into the main theatre (lower section) and the epitheatre (upper section). The epitheatre (“Epitheatro”), which is the seating above the diazoma, had the following structure: At the 32 33 point of contact with the landing (which refers to the diazoma, the horizontal walking separating the theatres’s upper and lower section) a mighty retaining wall of height of 1m and width of 2metres was constructed that in its front had a layer of stone blocks of white marble.

The lower portion of the wall is adorned with ripple from Lesbos. In ancient times, the epitheatre had twenty ascending staircases, twenty two grandstands, fifteen rows of seats and a height of about 8 m. The epitheatre did not cover the total range of the main theater from the right to its left side, as it was rather limited to 2metres. The main theatre (lower section) was divided by ten ascending staircases into eleven wedge-shaped seating sections (kerkides), with twenty five rows of seats, of which the first belonged to the rows of prohedriai (the front seating of honor directly in front of or around the orchestra).

The seats are based on slate commodity infrastructure and have elaborate work of sculpt- both at the front side as well as over their upper surface- where a notch existed, serving to pull viewers’ feet of overlying series. The orchestra (which is the dancing place or else the space between the audience and the stage), with a diameter of 25.50 m. is bordered by an external sewerage drain of 1, 90 m. width for the rainwater’s removal. It is covered and constructed with marble slabs bearing elaborate work sculpt.

The drain penetrates the scene’s foundations with two exits that range on its southern outboard chambers. It is also located in an excellent state of conservation. The parodoi (passageways or side entrances into the orchestra of the theatre or else the space between the audience seating and the skene building) with their retaining walls are preserved in excellent condition at a depth of 4 m. They are constructed of stone blocks of white marble with masterful sculpt work. Their marble pathways were of a great significance, as they led to the monument and later on composed the main road of processions.

The pathway on the right parodos, was connected with the 2nd ancient theatre and then with the main exit of Larissa towards Falanna and Olossona, from the wooden 34 35 deck of the Pinios River, directly opposite the today’s Scientific Technical Chamber. The way of the left parodos communicating with the marble road, was found, a few years ago, on a plot at the corner of Roosevelt Street and Cyprus.

This brilliant road ran from the sacred area of the square and moved in parallel with the current Ermou Street and Panos and somewhere there in the beginning of the street Filellinon and Venizelos, abruptly turned to the left parodos of the theatre. The retaining wall of the right-hand parodos (western) was revealed in length of 40, 86m. , height of 4 m. and width of 3, 55 m. The retaining wall of the left parodos (east) was revealed in length of 24, 75m, width of 3,55m and height of 3, 16 m. and is lost beneath the stores of the East side of the theatre.

As the two walls pass through the orchestra’s edges the theatre’s entrance is blocked. The best preserved part of the monument is the scene (or else the so called ‘skene’, the building behind the orchestra, originally used for storage but providing a convenient backing for performances) consisting of four rooms communicating through three entrances of a 37,50m overall length and 3m height. The two interconnected rooms in the middle served as a dressing area for the actors and the dramatist’s position, whereas the two edges leading to the southern side of the entrance functioned as sideboards. According to the archaeological survey, the scene’s construction has three main phases.

The first dates back to the first half of the 3rd century BC and is modern with the construction of the auditorium and the retaining walls. The four rooms were constructed with carved flintstones, deriving from the ancient quarries in the position “Krintiri” of Tirnavos. In the second phase of (1st half of the 2nd century BC) in front of the stage building, to the side of the Orchestra, a row of columns and the proskenion (the front wall of the stage or else the acting area which projected in front of the skene) were built in total length of 20, 00m and width of 2, 00m.

It consists of six jambs and six monolithic engaged Doric columns in lines, which pull up at marble 36 37 stone plinths of 0, 30 m height. On the Doric semicolumns and piers the Doric thrigkos (which is the topmost course of stones in a wall) was rested, which was posted in a cavity wall bond, parallel to the scene where occasionally entered suspending thranoi that vertically connected the Colonnade with the front wall of the scene. For the safe support of the suspending thranoi the front retaining wall of the scene was reinforced with an internal series of flintstones.

The proskenion had three entrances on the same axis same with the entrance of the stage. The third construction phase of the stage dates to the years of Roman emperors Augustus Octavian (28 BC – 14 BC), Tiberius (14-37 AD) and German (37– 41 AD). Honorary inscriptions in honor of all three emperors were found on the fronts of these Doric cornices of the scene. During this period the flintstones’ front row of the side chambers was removed and replaced with marble lining.

Also, inherent marble Doric semi-columns with Doric capitals were added to the facade and four pessaries were curved at the corners. That marble, like the one the epitheatre, the main theatre and the one of parodoi was taken from the ancient quarry of the municipal district of «Kastri» in Agia. During the excavation of part of the carriageway of Venizelou street (July-August 2006), a layer of limestone Doric columns was revealed, located at the south of the scene that belonged to a contemporary lodge as in its initial phase.

The magnificent First Ancient Theatre of Larissa was constructed in the first half of the 3rd century BC in the southern foothills of the hill "Fortress", where the ancient city's fortified Acropolis stood. It was not more until the end of the 3rd century or early in the 4th century AD that it existed. An earthquake in the late 2nd century or early in the 3rd century AD destroyed the second floor of the scene, the Doric entablature and a part of the transcendent epitheatre. Almost its total destruction was induced by a second strong earthquake that occurred in 7th century AD.

Welcome to the official website of the Ancient Theatre of Larissa